Posted on May 11, 2017 by langleybackcountry 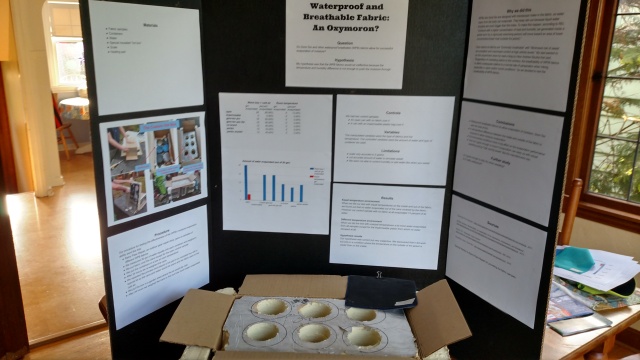 My son and I went back to the outdoor well for the science fair again this year, this time taking a look at waterproof breathable (WPB) fabrics. Gore-Tex is the king of these, but there are many other makers as well. In their marketing materials for Gore-Tex Pro, a 3-layer construction marketed for extreme conditions, Gore states the material is “Extremely breathable” and the benefits include “Minimised risk of sweat accumulation and maximised comfort at high activity levels or during activities with frequent work rest cycles.” Pertex claims their Shield Plus WPB has “a high level of dynamic breathability – the harder you work the greater the breathability of the fabric.” Those are indeed  very bold claims about achieving contradictory performance characteristics from a single fabric.

Andrew Skurka, a long-distance speed hiker with a huge amount of trail experience, in several articles on his blog, excoriates the makers of these materials – especially WL Gore, the maker of Gore-Tex – for their unrealistic marketing claims about their fabric as a panacea for performance across a broad range of activities conditions. He calls Gore “the King of Hype.”

Technically, WP/B fabrics are breathable, i.e. moisture can pass through the fabric. But the level of breathability is inadequate to keep up with moderate- or high-aerobic activity, even when ambient humidity is very low. I’m surprised that fabric manufacturers have never been sued for false marketing claims, given how they describe the fabrics as “extremely breathable” and post photos of a runner in a WP/B shell. – Andrew Skurka, 2015

Mr. Skurka’s opinion struck a nerve with me because I had reached a similar conclusion in my own experience with Gore-Tex while backcountry skiing in the Pacific Northwest. I actually changed my layering system in an acknowledgement that what I had was not effective enough for the cost ($). More on that later.

To further complicate matters, according to an advice column for REI, “An important factor for shoppers to recognize when they feel confounded by the complex-looking lab results they see promoted by some rainwear manufacturers: No universally accepted standard for fabric breathability exists.”

Before we get into our findings, I want to make clear that the limited, marginally scientific nature of our testing does not allow for quantifiable conclusions about performance under all conditions. That being said, there was still some interesting data, and I believe some broad trends may be inferred from the data. I am already thinking of additional testing we could do in the future.

The fabrics are supposed to work because of thermo- and hydrodynamics which force moisture to move from a wetter environment to a drier one and warmer air to cooler air. The micro-climate inside the jacket – hot and humid – forces the water vapor from sweat out through microscopic holes in the fabric membrane to the exterior, which is colder and drier.

To keep it relatively simple and manageable (my son is only in 7th grade, after all), we decided to hone in on this problematic “breathability” characteristic. We did not have access to sophisticated scientific measuring equipment, so we put together a relatively simple experiment with household supplies. We got fabric samples from Rainy Pass Repair in Seattle, an outdoor gear repair shop. We saved empty cat-food cans, put 30g of water in them (+/- 2g on a digital postal scale) and secured different fabric swatches over the top a rubber band. We tested the following fabrics:

To establish a base line, we ran an evaporation test inside the house at a relatively steady temperature and humidity. We placed the cans in a box in our guest room at room temperature and let them sit for 24 hours, and re-weighed the cans to determine how much water had evaporated.

The second test was trickier. We wanted to create a large temperature differential to mimic the conditions in the outdoors, so the face of the fabric had to be exposed to the air while the can and water were in a warmer environment, like inside a jacket. We ended up using some scrap insulating foam I had lying around to make an insulated box with a special lid to trap heat inside but leave the fabric exposed to the air. Under the cans I put a heating pad and put the whole thing in our uninsulated, not-completely-enclosed garden shed. 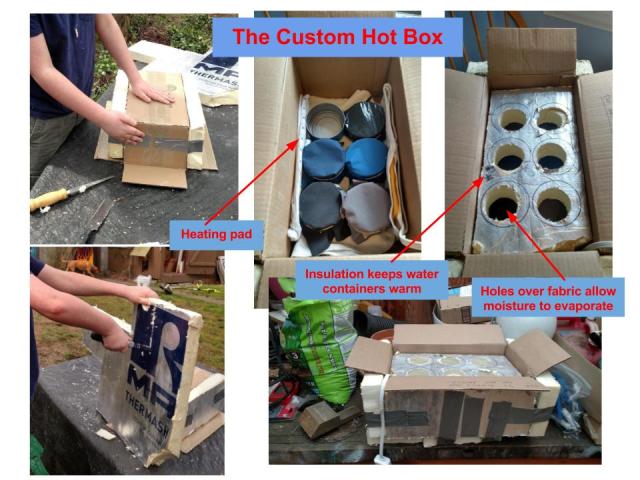 This worked surprisingly well. At one point I stuck a digital thermometer probe into the box and got a reading of 108 degF when the air temperature was in the low 50s. It was about in the low to mid 40s overnight.

After 24 hours in their respective environments, here is the raw data:

The first thing to notice is that in the indoor test without temperature gradient nothing evaporated out of any of the samples.

The second thing is that with a substantial temperature differential a fair amount of moisture evaporated. With the baseline established in the open control sample, the 2 Gore-Tex samples evaporated 75% of the amount of the open control sample. To be honest, that was actually better than I expected. Pertex Shield+ and the proprietary brand were next at 50%, and the regular Pertex at 41.67%.

So what conclusions can we draw from this? How does this relate to the manufacturers’ claims? Broadly, we can absolutely say that when dry, given a substantial temperature differential, WPB fabrics do, in fact allow moisture to evaporate through them, and are surprisingly good at it, with Gore-Tex definitely the best at this. However, it is equally apparent that environmental conditions have an enormous effect on this. It is notable that this test represented nearly ideal conditions. The temperature differential was substantial, there was no precipitation from the outside, and there was no continuous addition of moisture on the inside.

So what about the manufacturers’ claims that these are “highly breathable” across a broad range of activities from “high activity levels” to “activities with frequent work rest cycles.” Some sources say the average person sweats between .8 and 1.4 liters per hour during exercise. The best of these fabrics was 75% efficient in nearly ideal conditions. Garments made of these fabrics are marketed as the ideal solution for use in less than ideal conditions: high output activities like like hiking and mountaineering in wet weather. They aren’t bad fabrics; they are actually very good. But based on these numbers I am highly skeptical that they could come even close to the efficiency the manufacturers claim. And the reality is that when you factor in pockets, bunched fabric under pack straps, etc. you lose even more efficiency. It may be better than wearing an impermeable fabric, but it is likely far from the do-everything performance the marketing hype claims.

So what should we do? I suspect that direct venting (like pit zips) is likely to have a much greater effect on moisture buildup than the breathability, but opening zippers compromises the garment’s waterproofness. As far as comfort, in the real world there is also the sweat saturation in the layers between your skin and the shell: baselayers, insulation, etc. It seems to me that start and stop activities are probably where these fabrics are most beneficial, when there is an opportunity to move moisture out during periods of rest when you aren’t adding more.  Regardless of the material, in really wet weather the best strategy is probably to regulate your pace to minimize sweating to begin with. And chances are, you will just get damp anyway.

A couple of years ago I decided that here in the Pacific Northwest, where temps aren’t generally super cold and the moisture level is often similar outside and inside of my jacket, Gore-Tex just wasn’t worth the money. I modified my system for cool, moist, high-output activity to be cheaper and more flexible. Instead of the standard base and insulating layers with a WPB over it, I typically wear a light, uninsulated softshell (13 oz.) for most conditions up through mist and snow. When it gets wetter (rain) I put on a Pertex Shield Plus hardshell (6 oz.) over the softshell. This softshell/ hardshell combination is 19 oz. – in line with many much more expensive 3-layer WPB shells, and more adaptable. In warmer weather, instead of the softshell, I use a running jacket which only weighs 4.5 oz., making a 10.5 oz system. Here is my theory of why I think it works:

I am a member of Cascade Backcountry Ski Patrol (CBSP), a volunteer National Ski Patrol organization loosely based in Seattle. Our group operates as volunteers with USFS Ranger Districts outside of developed ski areas in the Cascade Mountains near Snoqualmie, Blewett, Stevens, and Washington passes.
View all posts by langleybackcountry →
This entry was posted in Uncategorized. Bookmark the permalink.